Creating Coherence in the Heart of Europe

Creating Coherence in the Heart of Europe

The Maharishi Invincibility Center lies a few footsteps away from the main institutions of the European Union. The past years, we have seen over and over again that groups of Yogic Flyers have an influence of harmony on the highest political decision making process. Furthermore, lobbyists regard Brussels as the second most important global political hub after Washington D.C. Also NATO and the largest diplomatic corps in the world with 5.000 diplomats are present. Therefore, a permanent coherence creating group is very important and we want to have 108 Yogic Flyers as this is the square root of 1% of the population of Brussels. In the European quarter surrounding the area of the Maharishi Invincibility Center, about 90.000 people are living. 30 Yogic Flyers can have an effect of harmony on this core group of the EU administrative centers.

Enjoy long group programmes and beautiful Maharishi tapes in the silent, profound atmosphere of our Maharishi Invincibility Centre, oriented perfectly to the east, and functioning for ten years as the silent core of Europe in the heart of Brussels. There are many beautiful parks in the area for refreshing walk and talks.

The group infront of the EU Commission

For more info about:

Brussels 108 provides a very profound rounding program while at the same time providing an opportunity to enjoy one of Europe’s most interesting cities. I met wonderful people from all over Europe and Stijn took care of every detail to make everyone’s stay comfortable. I highly recommend it to anyone who has a week or more to spend in Europe.
RAJA SHAWN

‘During this Assembly I realized that the goal of life is to live in Bliss Consciousness.’
Svetlana Shichova
Governor from Belgium

“As a result of these meetings, I have realized that it is our prime duty to support the political leaders for a perfect administration of the European Union.”
Dr. Ulrich Winzen
Sidha from Germany

“We arrived a few days before the beginning of the Assembly and started to participate in the rounding with other course participants. At first it was a nice experience doing the program in a surrounding that is dedicated to group TM Sidhi programme for many years. On the first day of the Assembly many new participants arrived and I felt some tensions in the group. After one day of rounding with this big group, all hostile tendencies disappeared, and I felt that we were like one big coherent wave. Inside that was felt like a strong feeling of happiness and bliss. For me it was a new experience that this feeling didn’t last just few moments, but it was continuing for a long time and even more cycles of rounding. After the end of the Assembly the number of participants was slowly becoming smaller and with that also the intensity of my inner experience decreased. But a deep pleasant quietness inside me stayed, and lasts even today when I’m a few days at home.”
Gasper Podobnik
Sidha from Slovenia

Being a part of Brussels 108 in September and October 2016 was a most powerful experience. Every day was a new revelation of new levels of bliss. It was more explicitly seen after some time when I came back home.
Mirjana Lukovic 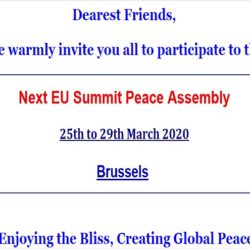 Dearest Friends, We warmly invite you all to participate to the    Enjoying the Bliss, Creating Global Peace    The TM Centre of Brussels lies in the area where all the European institutions are located. On March, the leaders of the EU nations will come together in this place to shape the future of Europe![…] 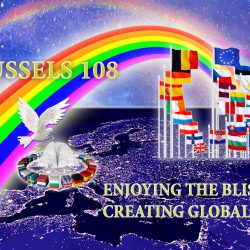 SAVE THE DATES! Calendar 2020 – Next EU Summit Peace Assemblies in Brussels

Enjoying the Bliss, Creating Global Peace   SAVE THE DATES! 2020 Calendar   The TM Centre of Brussels lies in the area where all the European institutions are located. In 2020, the leaders of the EU nations will come together in this place to shape the future of Europe and to find solutions[…]